The sport known as America’s pastime is in the grip of its worst crisis in a quarter century.

As other American sports formalize plans to play this year, Major League Baseball remains locked in a pay dispute with its players’ union over compensation terms for a pandemic-shortened 2020 season, heightening tensions in the long standing on sports funding.

“It’s just a disaster for our game,” league commissioner Rob Manfred said this week of the tough negotiations. “That shouldn’t happen.”

The fight – the first work stoppage since 1995 – threatens to undermine American interest in baseball, which has ranked first among all sports American fans have said they have missed during the pandemic, according to a Monmouth poll this this month.

The dispute hinges on two structural factors unique to MLB, which brought in $10.7 billion in revenue last year, according to a person familiar with its finances. One is a greater reliance on game day ticket sales and concessions than other leagues. The other is the lack of a traditional salary cap for ballplayers.

With new media rights deals on the line and the collective bargaining agreement set to expire next year, both sides dug in as other sports around the world return to the field.

“What started as a health lockout has now turned into baseball management flexing its muscles in a way that makes absolutely no economic sense,” said Gratz College president and pundit Paul Finkelman. baseball legal issues.

The dispute reached an apparent nadir on Monday when Mr Manfred told US sports channel ESPN he was ‘not convinced’ baseball would be played in 2020, less than a week after guaranteeing the sport’s return . Talks resumed, however, with commissioner and Major League Baseball Players Association executive director Tony Clark meeting in Arizona to discuss the standoff. 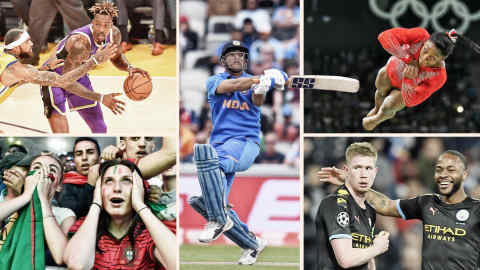 The latest offer on Thursday came from the players’ association, offering a 70-game regular season and expanded playoffs in 2020 and 2021, according to Clark. The main points of friction between the teams were over the number of games to be played and whether the players would receive pro-rated full salaries.

In a normal baseball year, teams play approximately 162 games from April to the end of September, the longest season in standard professional sports in North America. Last year, the League earned the lion’s share of its revenue — 39% — from tickets and ballpark sales, according to the Associated Press, making MLB particularly vulnerable to the practice of the era. pandemic of running sports without fans.

“For baseball it’s probably one of the hardest hit sports, while football is the opposite, with huge national media contracts to make up for losses due to lack of fans,” Michael Nathanson said. , media analyst and founding partner of analytics firm MoffettNathanson.

To offset its reliance on attendance, which has declined in recent years, MLB has worked to increase revenue from other sources, particularly media and sponsorships. The League’s most lucrative media rights come from a trio of national broadcast deals, worth an estimated $1.52 billion a year according to MoffettNathanson. This value is expected to increase by 45% to $2.21 billion when contracts are extended beyond 2021.

Last year, a flurry of deals for regional sports networks included a $10.6 billion acquisition by Sinclair Broadcast Group as well as an investor match for an 80% stake in YES Network, the home of local broadcast of the New York Yankees and Brooklyn Nets valued at $3.47 billion.

MLB has also experimented with selling streaming rights to various digital media platforms, including with Facebook and media startup DAZN, and last year struck an equipment deal in New Jersey worth of $1 billion.

At the same time, the players have strongly opposed any condition for the 2020 season that could be construed as a salary cap agreement, which they successfully opposed during baseball’s last work stoppage of 1994-95. That standoff ended with a decision by then-Judge for the Southern District of New York and current Supreme Court Justice Sonia Sotomayor, who sided with the players.

As negotiations continued, the MLBPA’s Mr. Clark declined owners’ proposals that would further shift the burden of pandemic-imposed losses onto athletes. “Our response has been consistent that such concessions are unjustified [and] would be fundamentally unfair to players,” he said in a statement this month.

In addition to acute concerns over the 2020 season, investors are increasingly worried about funding for lavish new stadiums. Rating agency S&P recently downgraded the bonds of Citi Field, the stadium operated by the New York Mets, and put the bonds of Yankee Stadium on watch. Both facilities were opened in 2009.

Players, meanwhile, have taken to social media to vent their frustration this week.

“You’re holding a losing hand,” Cincinnati Reds pitcher Trevor Bauer said. in a tweet directed against Mr. Manfred. “Unfortunately, it’s a losing hand for everyone involved, not just you. There are people who say don’t kill the golden goose.