Trending
An artistic performance during the opening ceremony of Hue Festival 2022 (Photo: VNA)

Thua Thien-Hue (VNA) – The week-long Hue Festival 2022 was launched on the evening of June 25 with a unique artistic program and Ao Dai (Vietnamese traditional dress) performance.

Under the theme “Cultural Heritage with Integration and Development”, the opening ceremony of Hue Festival 2022 was held in Ngo Mon Squareattracting thousands of visitors.

The opening ceremony introduced visitors to the cultural values ​​and identities of the former capital of Hue and the province of Thua Thien-Hue as a whole, which is striving for further development.

Addressing the ceremony, the vice-president of Thua Thien-Hue People’s Committee and head of the festival’s organizing committee, Nguyen Thanh Binh, said that after more than 20 years, the Hue Festival has become a national cultural and artistic event, helping to promote the nation’s cultural quintessence and popularize the former royal city of Hue as a safe and friendly city. and beautiful destination.

He said that starting this year, the Hue Festival will be held with events throughout the year, ranging from traditional court and folk festivals to activities featuring contemporary arts to attract visitors. 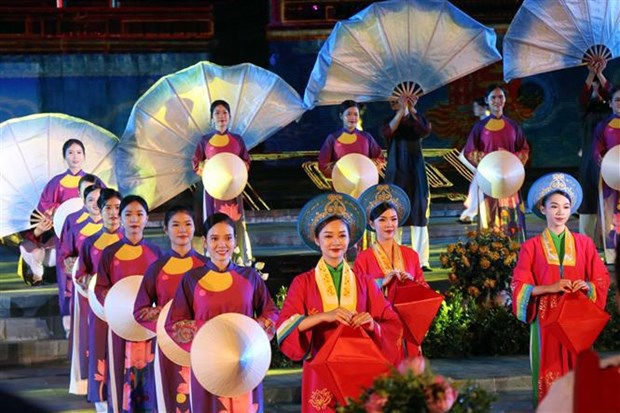 The 2022 Hue Festival will last until June 30 with eight major programs and numerous side events, including an artistic program during the opening ceremony of the festival, a street carnival and a musical program featuring the composer’s famous song Trinh Cong Son (1939-2001).

Other activities held before, during and after the Hue Festival include a food festival, hot air balloon festival, Vietnam Summer Fair 2022 and SUP (Standup Paddle Board) rowing competition. The events will take place at various locations along the Huong River./.