China is seeking more international and private funding for its billion-dollar Belt and Road Initiative, as it tries to counter concerns that its infrastructure construction program may create debt traps for host countries .

Yi Gang, governor of China’s central bank, said the country would work to improve states’ ability to service their borrowings.

“We need to objectively assess the debt problems of developing countries,” Yi told an audience of financial professionals, including IMF chief Christine Lagarde, at the Belt and Road Forum.

“We have to consider a country’s full debt service capabilities,” he added.

China is hosting dozens of countries at a forum to showcase President Xi Jinping’s foreign policy initiative this week.

New funding criteria from the Ministry of Finance and the People’s Bank of China aim to attract foreign investment partners by alleviating some of their concerns about host countries’ ability to service their debt.

China is now supposed to take into account a country’s total indebtedness and local currency financing capacity and provide more transparency when lending.

Traditional financial centers in Europe and Asia are lining up to get a share of new funding opportunities. “I think the UK and its related financial services sectors have a huge role to play,” said Catherine McGuinness, chair of the City of London’s Policy and Resources Committee.

The Swiss president will sign a memorandum of understanding to fund China’s projects in third countries during his visit to Beijing this week, said Daniela Stoffel, state secretary for international finance at the Swiss finance department.

The involvement of well-developed financial centers could alleviate growing concerns about the ability of Chinese banks and infrastructure companies to generate a return on investment. Many countries struggled to pay for BRI projects after the initial decline in investment.

“You lend hundreds of billions, are you doing enough due diligence? Because it’s Chinese money that’s at stake,” noted Harinder Kohli, founding director of the Emerging Markets Forum, a nonprofit that has studied Chinese overseas lending. “I think the Treasury and the PBoC are starting to focus on these issues.”

The issue of loss-making BRI projects is sensitive in China, with the country’s development banks acting as the biggest lenders.

About a quarter of official BRI projects have been financed by the Export-Import Bank of China, with the China Development Bank being the second largest lender. Ex-Im Bank is trying to improve its risk assessment capability, having historically relied on whether the Chinese Foreign Ministry classifies a government as “friendly”. 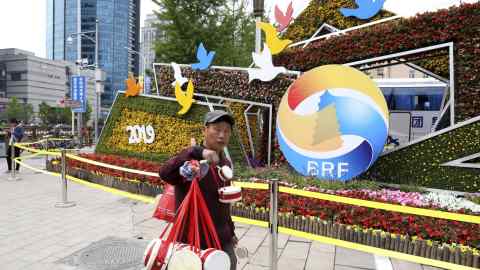 Ahead of the forum, Beijing moved to resolve some of the disputes over BRI projects that threatened to damage the reputation of the initiative. Malaysia negotiated a RM22.5 billion ($5.4 billion) reduction in the bill for its east coast railway project and awarded a Chinese state-owned company a 50% stake in the project. operation of the line. Kuala Lumpur would have faced a $5 billion penalty for completely canceling the project.

Ethiopia, which is struggling to pay for a $4 billion Chinese-built light rail line between the capital Addis Ababa and neighboring Djibouti, has also begun a process of debt restructuring, according to a tweet from the office. of Prime Minister Abiy Ahmed.

“The debt itself is not necessarily the problem,” said KV Kamath, director of the New Development Bank, a multilateral lender backed by China, Russia, India, Brazil and South Africa. . He instead cited the quality of the projects involved and called for more local currency funding.

“We have a disconnect between so many projects that are demanding resources and too much money for too few bankable projects,” said Jin Liqun, president of the Asian Infrastructure Investment Bank, another multilateral lender.

The chart in this article has been corrected to reflect that AIIB projects are open to non-Chinese contractors.